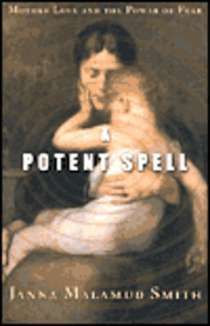 A Potent Spell: Mother Love and the Power of Fear

Becoming a mother one becomes a hostage to fortune. Bluffs, postures of indifference, fall away at the birth of a baby the way a summer play fort, boards leaned against a tree, collapses in the gust of a storm. Once a desired infant is born, you wish only that she outlive you.

Maternal responsibility accepts many frames, the gold-leafed or the tin, but I believe that this one is the mother’s own. You don’t toil to keep alive your son or daughter for country or kin. You do it because the alternative, the offspring’s misery or the threat, however remote, of her death is unbearable. Yet throughout history, most mothers have had to live through the death of a child; sometimes many children.

One hears how maternal attachment was different in the past, is still different in some places and circumstances. Theories posing as certainties float through hallways, magazines or dinner parties. They claim that women felt less love. Or that they waited until the child was through the first years, and thus less likely to die, before they signed on with the full complement, the level now sometimes kindled by the ultrasound image of the eight-week fetus.

Women likely did try many tricks to outrun the rogue monster loss that relentlessly pursued them. Different women in different centuries, cultures and social classes probably tried everything for a little relief: emotional distance, wet nurses, multiple births, detachment, chastity, abandonment, birth control potions, infanticide, depression, deep prayer, nunneries, brothels, opium or wine. Each was perhaps somewhat useful. In Mother Nature, the sociobiologist Sarah Blaffer Hrdy claims that human mothers, unlike other primates, select which infants to love and which to kill or abandon. Her assertion is interesting. Certainly, there is research, notably the anthropologist Nancy Scheper-Hughes’ writing about very poor mothers in contemporary Brazil, which suggests that in certain profoundly disrupted situations, mothers can become indifferent to infants’ well-being. I have no doubt that at moments that are psychically or physically dire, a mother can even become murderous while remaining delusional about her own destructive practices. “I have stopped feeding this child because it makes him feel better.” The problem is how to hold such knowledge in fair balance, giving it its due but not allowing it to minimize or obscure the reality of many mothers’ suffering, their helpless love.

Through much of history few observers have attended to the significance of the bereft woman’s grief. Mothers’ experiences of love and loss have been taken for granted, and somehow smudged such that “inevitable” became blurred with “inconsequential”. Thus has been created an odd kind of terra incognito--a place at once proximate yet unmapped and unexplored. Nevertheless, bits of information slip through in letters, diaries, folk art and gravemarkers, which, in spite of the massive historic absence of the mother’s perspective, refer to the pain of loss continually. I suspect this sorrow was a social constant, a tulle veil so commonly worn by women that the world they saw through it became the normal world, and their faces, slightly obscured, patterned with the shadows of its texture, became the common face.

Learning that her young son is to be killed, Euripides’ Andromache, in The Trojan Women written in the 5th century b.c.e., cries, “This is too much grief, and more than anyone could bear.” Then, addressing her child, she adds, “O darling child I loved too well for happiness, your enemies will kill you and leave your mother forlorn.”(1) But grief is disturbing to witnesses and other bystanders, who usually want quickly to get on with things. The Romans, according to Seneca, found crying widows discomforting, and made laws to limit sorrow’s duration. (“And so our ancestors, seeking to compromise with the stubbornness of a woman’s grief by a public ordinance, granted the space of ten months as the limit of mourning for a husband.”) Women’s subjectivity in this realm has been seen as something to contain rather than amplify. Any full statement of bereavement has been likely to become an unbearable statement of everyone’s risk, or of social injustice, and thus something, for the sake of social stability, best called weakness or female. (2)

An Absorbing Errand: How Artists and Craftsmen Make Their Way to Mastery
"[A] comprehensive, insightful, and articulate guide for everyone who has ever attempted to make art." --San Francisco Chronicle
My Father is a Book: A Memoir of Bernard Malamud
"Beautiful...A must for anyone interested in the work of Bernard Malamud, or the writer's life..." Mary Gordon
Private Matters: In Defense of the Personal Life
“a gorgeously written anecdotal cultural history of the emergence and the fragile sanctity of the modern creative self…”
-The New York Times Book Review
A Potent Spell: Mother Love and the Power of Fear
“reads like a deep, intelligent conversation with a valued woman friend.”
--Ottawa Citizen